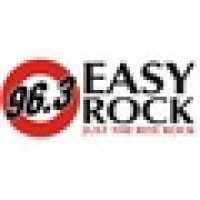 In 1988, DWRK began airing on the FM band in Metro Manila under ACWS – United Broadcasting Network, Inc.  Prominently known as 96.3 WRock, the station carried a “lite rock” format of programming since its conception.

The radio station then was purchased by the Fred J. Elizalde Group of Companies through Cebu Broadcasting Company in October 2008. Two months later, the station moved from FEMS Tower 1 in Osmeña Highway to its new base at the Manila Broadcasting Company in CCP Complex, Pasay City, where it shares facilities with its new sister stations – DZRH, Love Radio, Yes FM, Radyo Natin, and Aksyon Radyo.

Easy Rock presents the cream of adult contemporary music from the 70’s and 80’s in a soothing mix with soft rock hits and rhythmic alternative sounds, while accommodating today’s powerful ballads and lush vocal melodies.

Currently, 96.3 Easy Rock is considered the #1 FM radio station that people listen to at-work or in the office. The radio station is proud of its less talk, more music mantra, accepted widely in public and private offices, as well as drive time radio listeners.

In its sixth year of radio broadcasting, 96.3 Easy Rock managed to establish a new spectrum of niche market for radio listeners, by understanding their habits and catering to their values, needs and auditory desires by playing songs that will make them Remember Someone Today.

Easyrock presents the cream of adult contemporary music from the  70’s and 80’s in a soothing mix with soft rock hits and rhythmic alternative sounds, while accommodating today’s powerful ballads and lush vocal melodies.

With out sights trained on the C1 and broad C2 markets, Easyrock’s programming directly targets car owners, young executives, and working class professionals – particularly office employees and those working in establishments with a middle class to posh backgrounds such as banks and boutiques.

The primary market includes those between 30-40 years old, and people who are older but still prefer listening to a station with a soft, adult contemporary format. Following the introduction of more current easy-listening hit tunes, we expect an expanded audience range to include the 20-30 age bracket.

While the station caters to both men and women, female listeners slightly outnumber the males.

For radio listeners at work or on the road. The perfect soundtrack for the office or inside the car.

Consistent with the established brand of WRock, which is “less talk, less noise, more music,” Easyrock is generally an easy-listening station. Pleasant-sounding throughout the day, with “noise” kept at an acceptable level. Songs are relaxing and set the mood, but are very engaging and popular C1 and C2 audiences.

96.3 Easy Rock - DWRK is a broadcast radio station in Manila, Philippines, providing Soft Rock music and information geared to be a workplace radio ... See more station. After 20 years of broadcasting as WRocK brand, DWRK became 96.3 Easy Rock in May, 2009.

We are the ONLY at-work listening FM radio station in the Philippines. We are 96.3 Easy Rock, just the rite rock! #RememberSomeoneToday

We are the ONLY at-work listening FM radio station in the Philippines. We are 96.3 Easy Rock, just the rite rock! #RememberSomeoneToday