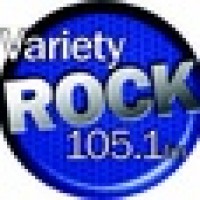 Variety Rock 105.1 focuses on all things rock. Acts include Van Halen, U2, Aerosmith, Pearl Jam and The Police. They play rock from the 70's, ... See more , 80's and 90's with very little news or talk interruptions.

Funny thing. It turns out that when radio stations do the listening, some pretty good ideas can come from that. And that's exactly how the new Variety Rock 105.1 came to be. After talking with hundreds – about four hundred, to be precise - of Boise area radio listeners, a few things kept coming up again and again. "We want a station that plays more than a handful of songs." "We like variety – but ...I can do without all the goofy songs." "What I really want is music in the morning, and everybody's talking all the time!" If you take ideas like that & put 'em all together, the result is a radio station that plays thousands of the greatest rock songs ever recorded – from the late '60s (Beatles, Animals, CCR, Hendrix) to ... now (Nickelback, Creed, Green Day, U2) – and with lots and lots of great rock songs from the '70s & '80s. You also get a station with a "we mean it" limited commercial policy, with no DJ chatter but WITH some fun & energy. You get America’s first Variety Rock station – designed specifically for Boise & southwest Idaho. See More