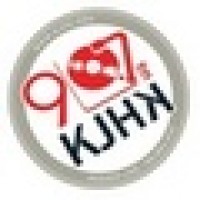 It may have been a small college radio station, but it took the muscle of the US Army to get KJHK-FM 90.

on September 6, 1975, a Sikorsky helicopter from the “Flying Cranes” of the Kansas National Guard’s 137th Aviation Company hovered noisily over Mount Oread.

Enlisted by station personnel, the soldiers and their helicopter were there to hoist KJHK’s new antenna into place on the radio tower behind Marvin Hall.

, but it would be another five weeks of paperwork-related delays before the station finally hit the airwaves.

Over the next 35 years (and up to the present day) KJHK would serve as Lawrence’s iconoclastic, self-described “Sound Alternative” to mainstream commercial radio.

Its history has often been as colorful as the music it has played.

KFKU, the University’s initial venture in radio broadcasting, had made its official debut on December 15, 1924, but a combination of signal interference and the station’s focus on educational programming had reduced its airtime to just five hours a week by the 1950s.

Meanwhile, in September 1952, the University’s public radio affiliate KANU began operations, and KU itself had been served since 1956 by KUOK, a “wireless-wired” cable AM station run by School of Journalism students and available only in the dorms.

But what it lacked in size, KJHK attempted to make up for with the diversity of its sound.

From the beginning the station aimed not only to serve the practical interests of the student community, but also to provide its listeners with progressive musical selections and provocative informational programs.

Nontraditional rock and jazz dominated the musical offerings, and the station’s scant Top-40 coverage got the axe by early 1976 in favor of more avant-garde fare.

KJHK’s Fall 1975 program schedule, for example, included such music shows as “Jayhawk Jams,” a “progressive music show…that keeps things loose with the best new music in town,” and “After Dark,” a show offering “good progressive sounds…with the host that gives the most.

” Alongside the music were talk shows concerning student life, many of them aimed at minority students like “Relevance in Black” for African-Americans, “The First Americans” for Native Americans, and the feminist-oriented “The New Woman.

The station’s student-run status and its self-consciously “progressive” musical leanings meant that its unorthodox sound and rough delivery alienated some listeners.

One student complained in the University Daily Kansan in 1977 that the “monotonic and mundane voicing” of the student DJs had “succeeded in producing the most boring radio programs in the Lawrence area.

” Others, in the words of a 1982 Kansan article, considered the station’s punk and New Wave selections as nothing more than “mindless babble cranked out at high volume by orange-haired idiots.

” Even some KHJK staffers complained of its musical inconsistency, annoyed that the station’s allegedly “progressive” play lists were seemingly thrown together willy-nilly by individualistic DJs with no sense of professionalism.

One station manager, for example, was distressed to hear a heavy metal tune followed by the “Mickey Mouse” theme.

But many others loved KJHK’ s quirky approach to programming.

In 1982 New York Rocker ranked the station as one of the best in college radio.

In 1986 Spin magazine honored KJHK for “developing and promoting” local alternative music, and the station was a perennial favorite in statewide broadcasting awards.

Listeners around Mount Oread agreed that the station was a winner.

On April Fool’s Day, 1980, KHJK announced, tongue in cheek, that it was changing its format to “all disco” and proceeded to flood the airwaves with the latest hits by the likes of Donna Summer and Gloria Gaynor.

Apparently oblivious to the April 1 date, over 300 angry callers besieged the station, demanding the return of its progressive programming.

Among the deluge of angry callers was a person who threatened to blow up the KU Endowment Association unless the station returned to its old ways.

A more authentic format change in the summer of 1988, inspired by an independent study which suggested KHJK play more Top-40 tunes to broaden its audience, resulted in at least one campus protest rally and a number of angry letters to the Kansan.

But some KJHK controversies were more serious than debates about musical taste.

The station also had several brushes with FCC regulators.

In 1989, the federal regulatory agency fined KJHK $2,000 for violations regarding the content of donor announcements.

One of the more serious incidents, however, came on October 5, 1978.

On that day a bored KJHK staffer wrote a bogus wire report claiming Waterloo, Iowa, had been destroyed by a nuclear reactor explosion, killing some 15,000 people.

After handing it to the station’s news editor as a practical joke, the author tossed the fake report into a wastebasket around 3:30 p.

But another staffer, thinking it was authentic and failing to verify it, fished it out of the wastebasket and read it on the 4:50 p.

Several other stations picked up the story, and by morning of the next day, FCC investigators from Kansas City had descended on Lawrence, suspecting the bogus news item was the work of anti-nuclear activists.

Little came of the incident in the end, though the guilty students were relieved of their radio duties.

The growing multiculturalism of the 1980s brought controversy to KJHK as well, as the station became entangled in debates over racial and gender discrimination.

In 1983 the KU campus group Blacks in Communications complained to the Student Senate that KJHK failed to provide enough programming for black students, claiming that only three of the station’s 168 broadcasting hours per week were aimed at minority listeners.

Three years later, station DJ Kiesa Harris filed a complaint with the KU office of affirmative action, claiming that her feminist-oriented program “Womonsong” had been bumped into a less desirable time slot due to its controversial content.

KJHK Program Director David Hale had termed the show too “lesbian-oriented” and moved it from its normal Saturday 6-9 p.

At least one male listener took the station to task in the Kansan, asking “has KJHK forgotten their toots and reasons for being on the air – to provide a “Sound Alternative?” But mediation soon defused the incident – “Womonsong” remained on the air unchanged.

Things became especially intense in February 1988 when KJHK invited two local members of the Ku Klux Klan to take part in a debate about racial issues on the talk show “Jay-talk 91.

” Unable to find any opponents willing to share a microphone with KKK members, the station decided to go ahead with the show anyway.

But pressure from leaders of the Lawrence African-American community, who opposed giving the Klan a free podium, convinced University officials and the KU School of Journalism faculty to cancel the Klansmen’s visit.

On February 19, KU Executive Vice Chancellor Judith Ramaley told the Kansan that security concerns had been a major factor in the decision.

Few on campus were happy with this explanation and the resultant outcome.

Although KU was hardly a hotbed of Klan support, many feared the University had sacrificed freedom of speech to political concerns.

” The Kansan also blasted the decision.

Administrators, it claimed, “hid behind ‘security reasons,’ thus proving…that at KU, the threat of violence carries more weight than the principle of academic freedom.

” Of course, the Klan was not a group to be taken lightly – in response to the decision to ban the group from KJHK, Klan Exalted Cyclops J.

Allen Moran threatened to “come to the KU campus [and] roar in the streets.

” Nothing of the sort ever happened, and by March the issue had faded away.

Through the 1990s, KJHK maintained its iconoclastic course.

The station would continue to win broadcasting awards and appear near the top of “best station” polls around the state and nation, and in December 1994 KJHK became the world’s first radio station to offer a live, continuously streaming Internet signal.

Controversial topics like sex and homosexuality (including a 1992 debate between gay leaders and Topeka anti-gay activist Fred Phelps) continued to find airtime and inspire debate.

And, if its past is any indication, KJHK will offer more of the same in the years to come, advancing its self-appointed mission of providing sound alternatives to the everyday radio experience.