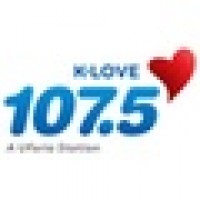 KLVE (107.5 FM), known as "K-LOVE 107.5 FM", is a radio station licensed to Los Angeles, with a Spanish adult contemporary musical format. The station is owned by Univision Radio, a subsidiary of Univision Communications. The station has studios located on Center Drive (near I-405) in West Los Angeles, and the transmitter is located atop Mount Wilson.

LA's first and longest-running Spanish FM, debuting in 1975, KLVE has consistently been the market's leading Spanish station for decades, and also since the advent of Arbitron's PPM (electronic ratings measurement). With a weekly audience of roughly 2 million people, KLVE is widely regarded as the most successful Spanish-language radio station in the U.S.[citation needed] Its operations started in Hollywood from 1975 to 1999, then in 2000 it moved to Glendale at Central Avenue south of the 134 Freeway until 2012, then in 2013, along with sister stations KTNQ, KSCA, KRCD and KRCV moved to the Univision Broadcast Center west of the I-405 Freeway in Los Angeles.

The call sign and slogan comes from its past, when it played beautiful music songs in English. During the early 1970s, the station was a "Soft Rock" format station owned by California's PSA Airlines, and used the slogans "Something to Love", and "Get Your Rock Soft". It's been said[by whom?] that the on-air personalities on early 1970s KLVE and competing station KNX-FM, were the models for some of the characters featured on the hit television series WKRP in Cincinnati.[citation needed]

This station is not related to K-Love, which is a national network of English-language Christian radio stations based in Rocklin, California. In fact, the branding of KLVE disables the national network from entering the Los Angeles market because of the name conflict that would ensue. At one point the station was KKMD-FM a rock station before it became what it is today: a Spanish station.