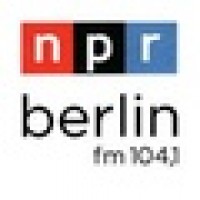 Berlin’s NPR News Station. Live on 104.1 FM in Berlin and worldwide at http://www.nprberlin.de/

NPR is an internationally acclaimed producer and distributor of noncommercial news, talk, and entertainment programming from the United States. NPR Berlin, 104.1 FM covers an area of Berlin and close in suburbs which are home to more than 3.1 million inhabitants. We offer the news-magazines Morning Edition and All Things Considered, plus NPR's Talk of the Nation, Fresh Air with Terry Gross, and The Diane Rehm Show. 104,1 also airs Life in Berlin, features exploring the city's vibrant arts and culture scene, as well as interviews produced in cooperation with local organizations. Check out the NPR Berlin Blog: http://www.nprberlin.de/topic/npr-berlin-blog

Listen to the Life in Berlin podcast: http://www.nprberlin.de/feeds/term/20/rss.xml