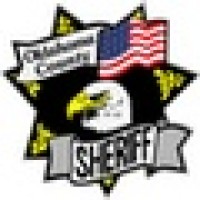 Official Oklahoma County Sheriff's Office Facebook page updated by the OCSO Public Information Office. "Pride in who we are, professional in what we do."

The mission of the Oklahoma County Sheriff’s Office is to provide professional and quality law enforcement, custodial, and court related services to all persons and to effectively perform all duties mandated to us by the laws of the United States of America and the State of Oklahoma in a professional, ethical, and cost efficient manner. We work as partners with our citizens, sharing our plans and strategies, and providing ongoing honesty and candor in communications. We recognize our badge as a symbol of public trust and expect exemplary behavior from our employees both in the performance of their duties and in their personal lives.

The opinions expressed by visitors to this page do not reflect the opinions of this agency. Comments will be monitored and the Oklahoma County Sheriff's Office reserves the right to remove obscenities, off topic comments, spam, and personal attacks. Any content posted or submitted for posting is subject to public disclosure.

The Office of Sheriff is one of antiquity. It is the oldest law enforcement office known within the common-law system and it has always been accorded great dignity and high trust. For the most part, the Office of Sheriff evolved out of necessity. Were it not for laws which require enforcing, there would have been no necessity for the Sheriff. There would have been no need for the development of po...lice administration, criminology, criminalists, etc. This is not the case, however. Man learned quite early that all is not orderly in the universe. All times and all places have generated those who covet the property of their neighbors and who are willing to expropriate this property by any means. As such, man's quest for equity and order gave birth to the Office of Sheriff, the history of which begins in the Old Testament and continues through the annals of Judeo-Christian tradition. Indeed, there is no honorable law enforcement authority in Anglo-American law so ancient as that of the County Sheriff. And today, as in the past, the County Sheriff is a peace officer entrusted with the maintenance of law and order and the preservation of domestic tranquility. Sheriffs have served and protected the English-speaking peoples for a thousand years. The Office of Sheriff and the law enforcement, judicial and correctional functions he performs are more than 1000 years old. The Office of Sheriff dates back at least to the reign of Alfred the Great of England, and some scholars even argue that the Office of Sheriff was first created during the Roman occupation of England. Around 500 AD, Germanic tribes from Europe (called the Anglo-Saxons) began an invasion of Celtic England which eventually led over the centuries to the consolidation of Anglo-Saxon England as a unified kingdom under Alfred the Great late in the 9th Century. Alfred divided England into geographic units called "shires", or counties. In 1066, William the Conqueror defeated the Anglo-Saxons and instituted his own Norman government in England. Both under the Anglo-Saxons and under the Normans, the King of England appointed a representative called a "reeve" to act on behalf of the king in each shire or county. The "shire-reeve" or King's representative in each county became the "Sheriff" as the English language changed over the years. The shire-reeve or Sheriff was the chief law enforcement officer of each county in the year 1000 AD. He still has the same function in Oklahoma in the year 2000 AD. Oklahoma’s first constitution, adopted in July 1907, created the Office of Sheriff as an elected official in each county. The concepts of "county" and "Sheriff" were essentially the same as they had been during the previous 900 years of English legal history. Because of the English heritage of the American colonies, the new United States adopted the English law and legal institutions as its owner. Oklahoma’s constitution has been revised several times through the years, but the constitutional provisions establishing the Office of Sheriff remains the same as it was in 1907, which, in turn, is strikingly similar to the functioning of the Office of Sheriff at the time of Alfred the Great and William the Conqueror. The major difference, of course, is that the Kings of England appointed their Sheriffs. From the earliest times in America, our Sheriffs have been elected by the people to serve as the principal law enforcement officer of each county. Oklahoma County marks its beginnings with Oklahoma Territory. It was one of the first seven counties of Oklahoma, organized under the Organic Act passed by Congress on May 2, 1890. It was designated County Number 2 until voters named it Oklahoma County. There have been 22 Sheriff’s of Oklahoma County. The first Sheriff was C.H. DeFord who took office on June 30, 1890, and served for 19 months through January, 1892. The average length of service of all Sheriff’s of Oklahoma County has been 5 years, with the longest being almost 26 years and the shortest 1 month. John Whetsel was sworn in as Oklahoma County Sheriff in 1997. Clearly, the Sheriff is the only viable officer remaining of the ancient offices, and his contemporary responsibility as conservator of the peace has been influenced greatly by modern society. As the crossbow gave way to the primitive flintlock, the Sheriff is not unaccustomed to change. But now, perhaps more than ever before in history, law enforcement if faced with complex, moving, rapid changes in methodology, technology, and social attitudes. As Thomas Jefferson wrote in his THE VALUE OF CONSTITUTIONS, "the Office of Sheriff is the most important of all the executive offices of the county." See More

Leave a comment about Oklahoma County Sheriff and Fire