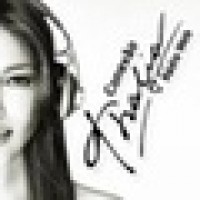 THALIA (born Ariadna Thalía Sodi Miranda, August 26, 1971 in Mexico City, Mexico) is a successful Latin Grammy-awarded Mexican singer and actress. She is amongst Mexico's most famous telenovela actresses and has sold more than 25 million albums worldwide. In 1981, Thalía started her musical career as a vocalist in the Mexican child group Din Din. She performed in the music festival Juguemos a Can...tar as a member of the group and later, as a soloist. As a vocalist, she is considered a mezzo-soprano. In 1984, she was cast in the teenage version of the stage production Grease, being cast in the lead role of Sandy. In 1986, Thalía replaced one of the original female vocalists of Timbiriche, Sasha Sokol. That same year, she was cast in her first soap opera, Pobre Señorita Limantour. In 1988, she starred in the Mexican telenovela Quinceañera, after which she went to Los Angeles, California to prepare for a solo career. In 2000, She starred in the independent film, Mambo Café, a modest Hollywood production in which she played a young Puerto Rican girl, alongside Danny Aiello, Paul Rodriguez, and Rosanna de Soto. Later that year, on December 2, 2000, Thalía married the former president of Sony Music, Tommy Mottola, at St. Patrick's Cathedral, New York in a three-million dollar ceremony and reception. They currently live in New York City. Thalía has also worked as a record producer, composer, TV and radio host, fashion designer, magazine editor, and model. Thalía has been a guest on television programs like Entertainment Tonight, El Show de Cristina, Good Morning America, Hard Copy, The Rosie O'Donnell Show and 20/20. In 2007, she joined the ABC Network in order to start the radio program "The Conexión Thalía Radio Show," where she talks about music, fashion, news and political issues. On June 12, 2007, according to news released on the website of Hello! magazine, Thalía in an exclusive interview for the Mexican edition of ¡Hola!, announced that she was pregnant. On October 7, 2007, Thalía and Tommy Mottola welcomed their first child together, a girl named Sabrina Sakaë... On December 1, 2009 Thalía released her latest musical work called "Thalia En Primera Fila." See More