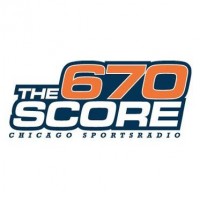 Welcome to 670 The Score, the home of Cubs Radio, on CBSChicago.com!

The Score is partners with CBS 2 TV and WBBM 780, and they give you the best Chicago has to offer. 670 The Score is part of CBS Radio, a division of CBS Corp.The Score - WSCR is a broadcast radio station in Chicago, Illinois, United States, providing Sports News, Talk and Live coverage of sports events as ... See more the radio flagship home for Chicago White Sox baseball as well as Northern Illinois University Huskies football and men's basketball, and DePaul University basketball.

670 The Score is Chicago's most listened-to sports radio station and home of Chicago White Sox baseball!

670 The Score (WSCR-AM) is a sports radio station in the Chicago, Ill., radio market. The station is owned by CBS Radio and transmits on 670 kHz on the AM dial. Its transmitter is located in Bloomingdale, Ill. It's known as "The Score," and has been on the air since 1992. WSCR is currently the radio flagship home for Chicago White Sox baseball University of Illinois football and men's basketball and DePaul University men's basketball.

Last comments on The Score - WSCR

John
Your streaming sucks
2016-05-13 12:32:05 Report comment
Kerry
To Goff (sorry if I misspelled) I totally agree with your stand today re: Shaw's potty mouth. I remember as an 8-yr old (1967) calling someone a retard, and my dear mom (who passed away last month at 86) came flying out of the kitchen door, sent my friends home, dragged me in the house and scolded me "never use that type of language again...EVER!" Several years later, she also talked to me about looking at the world through rose-colored glasses....I did not have to take every lost lamb into my fold. But it was wonderful I cared that much. I just needed to be careful. Anyway, I had an amazing mom who for over 50 years set me on the course to accept everyone for who they are, and being discriminatory was not okay. You are a great guy and I wish more of your listeners would actually do that...listen. Thanks for being such a wonderful voice of reason and a wonderful sports' commentator. - Kerry
2016-04-20 18:13:02 Report comment
Rob
Matt Avatticola's trashing of Curt Schilling on the Boers and Bernstein show was out of line! He got Ronge and Boers to chime in but, wtf? Who made him the moral judge? Bernstein gets away with it because he has been on the radio for years and the controversy he provides creates ratings, but since when is the Score the moral judge of people. Mike North would have gotten fired for the same thing 15 years ago.
2016-04-19 22:36:40 Report comment