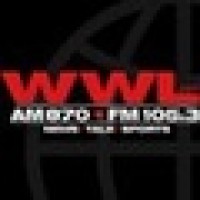 WWL is a news/talk/sports radio station in New Orleans, Louisiana. The "Big 870" reaches large parts of the Gulf Coast in the daytime, and much of the United States at night. It is regularly heard east of the Rockies every night, and sometimes is heard as far west as California. In April 2006, WWL began a simulcast on WWL-FM 105.3 MHz in the New Orleans area. WWL is the flagship of the New Orleans Saints Radio Network, is an affiliate of the CBS Radio Network, and is owned by Entercom Communications.