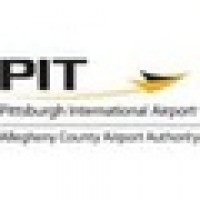 Pittsburgh International Airport in Pittsburgh, Pennsylvania, United States, is operated and managed by the Allegheny County Airport Authority, and ccommodates more than eight million travelers ... See more in nearly 148,000 aircraft operations per year. It also serves as the home of Pittsburgh Air Reserve Station, a combined facility of the Air Force Reserve Command and the Air National Guard, providing aerial refueling, air mobility and tactical airlift support to the U.S. Air Force and other U.S. Department of Defense activities.

To be the airport of choice.

Pittsburgh International Airport (PIT) is a world-class facility that accommodates more than eight million travelers in nearly 148,000 aircraft operations per year. With about 150 non-stop flights per day to 40 destinations, Pittsburgh International Airport is served by 12 commercial air carriers. Pittsburgh International Airport also provides nonstop service to Paris on Delta Air Lines with conne...ctions to 100 cities in Europe and beyond on Air France. PIT has been frequently recognized for its quality in meeting traveler’s needs. The OAG Worldwide, market research leader JD Power and Associates and Conde Nast Traveler’s Magazine all have named PIT among the top airports in recent customer satisfaction surveys. Pittsburgh International Airport is operated and managed by the Allegheny County Airport Authority. Opened October 1, 1992, Pittsburgh International's Midfield Terminal brought a new vision to the region for domestic and international air travel. Designed to be the nation's best gateway to international commerce, PIT is within a 90-minute flight of 70 percent of North America's population. Capacity is one of PIT's most valuable assets. The Terminal is a series of three buildings linked by a variety of people moving transportation means. With the airplanes at one end and the parking lot at the other, travelers need only take a few steps to cross more than half a mile from the landside to airside terminal. A model to other airports around the world, the design of the terminal was planned to simplify aircraft movement on the airfield and ease pedestrian traffic to the gates. Since opening, PIT's Midfield Terminal has been recognized on numerous occasions for its efficient and creative ways to assist travelers. PIT has become a major economic generator for southwestern Pennsylvania. And it continues to grow. In the last year, airlines have launched new service from PIT, new routes have been added, and development surrounding the airfield is growing. See More