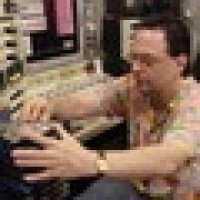 Here's a little history on the evolution of Ricky The K's Solid Gold Time Machine. Ricky grew up in the New York market and was influenced by 1960s WABC, WMCA, WMGM and WINS. Ricky, more specifically, grew up in North Jersey in an area steeped in the history of rock n' roll. One of Ricky's teenage friends was Bobby Macioci who's father, Nick Massi was the bass singer and bass guitarist of the F...our Seasons. Carole King and Gerry Goffin lived about one mile from Ricky on Pleasant Valley Way in West Orange. Carole King wrote the song "Pleasant Valley Sunday" about that street. Irwin Levine, who wrote such hits as "Knock Three Times", "Candida", "This Diamond Ring" and "Black Pearl" was a neighbor of Ricky's. Ricky attended three New York Beatles concerts in 1964, 1965 and 1966. Ricky was especially influenced by Dan Ingram. His biggest out of town 1960s influence was WCFL, Chicago, and Ricky's mentor and best friend was WCFL's famous night jock, Barney Pip. Ricky was also influenced by Rick Shaw using Tonto dropins on WQAM, Miami. The Solid Gold Time Machine was something that Ricky experimented with on various stations in the 1970s but, the big experiment was on 50,000 watt KOMA, Oklahoma City, in the early 90s, which gave Ricky a large regional cult following in the twenty-two states, Canada and Mexico that KOMA's tremendous night signal covered. Ricky also started using Tonto dropins on KOMA so Tonto also gained a cult following of his own. The cult following was so significant that the radio trade paper Radio & Records did a full page story on Ricky, the show and KOMA in April of 1991. It was the first story that Radio & Records ever did on KOMA. Ricky got much more positive press coverage in the years following KOMA with stories in such papers as the New York Daily News, Miami Herald, Toronto Sun, San Diego Union-Tribune, Kansas City Star, Fort Worth Star-Telegram, Tampa Tribune, Pittsburgh Post-Gazette, Newark Star-Ledger, Houston Chronicle, Atlanta Constitution and many other major U. S. newspapers as well as many major newspapers around the world. See More