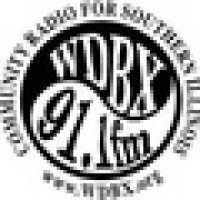 The WDBX 15th Anniversary Ball, "Venetian Masquerade" Saturday February 12, 2011 6-11pm at the Carbondale Civic Center. Starring Soul Glo and the SIU Studio Jazz ... See more Orchestra. Italian dinner by Great Boars of Fire. Cash bar by Hangar 9. Wines by Alto Vineyards. Silent Art Auction. Tickets $40, on sale now at Arnold's Market, Harbaugh's Cafe, The Neighborhood Co-Op, Town Square Market, Longbranch Coffeehouse and Plaza-Wuxtry Records. All proceeds benefit WDBX Community Radio for Southern Illinois. We need art donations for our Silent Art Auction! All kinds of art are welcome, including painting, photography, glasswork, metals, fabrics and more! Please drop off art at the station and fill out a Artist Information Form when you do. Items needing framing must be received by February 4th. WDBX congratulates Dr. John Hochheimer on his election as President of the WDBX Board of Directors! We also thank Francis Murphy for his twelve extrordinary years of service at the helm. Station History On a sunny, spring afternoon in 1992, Tom Egert drove home to Carbondale from St. Louis propelled by the sounds of reggae and salsa on his car radio. This enlivening musical mix broadcast by KDHX, St. Louis' community radio station, brought Tom happily within 20 miles of his home before he'd driven out of range of the station. Scanning the local radio dial, he could find no comparable musical programming and in that moment of frustration the idea of creating an invigorating, culturally diverse, community radio station in southern Illinois was born. Heterodyne Broadcasting Company, a 501(c)3 non-profit organization was founded in 1993 and ground for the station building was broken in the fall of 1995. The first Volunteer recruitment meetings were held February 6, 1996. Over 100 people attended the two meetings that day; from those, 40 completed training and began regular operations about two weeks later. At first the station was on the air from 4-10pm daily and grew quickly from there. Currently, over 100 volunteers produce more than 80 weekly programs. Several have been on the air from the very beginning. The programming is a mirror of the diversity of our community, with music from across the street to around the world, as well as a vibrant section of local talk programming and more. In August 2003, thanks to the efforts of our founder Tom Egert, the late US Senator Paul Simon, and the generous contributions of our listeners, we increased our broadcast power from 700 to 3,000 watts. WDBX now covers all of Jackson and Williamson counties, as well as most of Perry and Franklin, and parts of Union, Johnson and Saline counties. In all, our signal can reach over 100,000 southern Illinoisans. In December of 2005, thanks to the efforts of member James Throgmorton and Neon Internet, we began streaming live at wdbx.org. WDBX can now be heard around the world! Governance WDBX is governed by a ten-member Board of Directors, made up of the three permanent members of the Board of Directors of the Heterodyne Broadcasting Company and seven directors elected from amongst our membership. Elected directors serve a two-year term. Up to two members of our volunteer staff may serve on the Board. The Board supervises the sole employee, Station Manager Brian R. Powell. The WDBX Board is comprised of: Dr. John Hochheimer, president (term expires Dec. 2012), James A. Wall, vice-president (term expires Dec. 2011), Tom Egert (founder-permanent member), Gene Turk (co-founder-permanent member), Navreet Kang (permanent member), Francis Murphy (term expires Dec. 2011), Kathy Livingston (term expires Dec. 2012), Tim Damian (term expires Dec. 2012), Bonnie Cotter (term expires Dec. 2011) and Alex Paull (term expires Dec. 2011). Contact Information Brian R. Powell, Station Manager WDBX Community Radio for Southern Illinois 91.1fm 224 N. Washington St. Carbondale, IL 62901. Studio: 618-457-3691 Office: 618-529-5900 E-mail: wdbx911@yahoo.com Owned by Heterodyne Broadcasting Co., a 501(c)3 not for profit corporation.

WDBX provides a public forum for artist and cultural expression and for the exchange of ideas among individuals and the community.