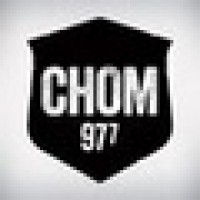 CHOM-FM is an English language radio station located in Montreal, Quebec, Canada. Owned and operated by Bell Media, it broadcasts on 97.7 MHz from the Mount Royal candelabra tower, with an effective radiated power of 41,200 watts (class C1) using an omnidirectional antenna, while its studios are located at the Bell Media Building at 1717 Rene-Levesque Boulevard East in Montreal.

The station has a mainstream rock format since the station started using the brand name CHOM, and is sometimes pronounced /ˈʃoʊm/ shoam as if it were a French word, but other Bell Media Radio personalities have also pronounced it as /ˈtʃɒm/ chom.

Since 2013, the station has been broadcasting in the Pärnu region of Estonia on the same frequency. It is not known where this originates from, but broadcasts with full RDS text, including the time in Montreal.

John ORourke
This is information that all your listeners should know, Anybody can be assaulted with this at the moment, I would love to see CHOM FM take the lead in fighting military organized gang stalking that according to a police officer i spoke to, is very popular in Montreal right now.. They have asked city council for help in fighting this, I think we need a publicity campaign! There's no place for mind control weapons in this country!.. Please watch the video below as gang stalker points her device at target's head (8:43)to scan their brain! People need to know about this. Please, dont be silent about it. Canada is not a lab for non consensual experiments or whatever the heck they're up to! Dr John Hall wrote a book about this titled 'Guinea pigs - technologies of control. Look him up on youtube, (very evil..) as well as interviews with Dr Rauni Kilde, Alfred Wenre (war crimejudge, lawyer, author and Magnus Olsson, expert.. Former NSA director William Binney gave a speech to victims of this at a covert harassment conference 3 years ago and Bill Clinton apologized in the mid nineties but it has only gotten worse.. Sad and terrorizing!.. https://www.youtube.com/watch?v=70dxQTW46f4 John ORourke johnorourke@runbox.com 4389379534
2017-04-13 23:09:28 Rapport commentaire
Urgent for Terri Demonté - Cadeau pour enfant malade, Gift for a sick child
My husband one 2 tickets to see the Montreal Canadians this saturday, December 10th. Seets in red, rangée H. He would like to give them to a child who is sick and can not do much. For sure He has to love the Canadians and he could be accompanied by his father or mother. Would you know of a child or a place I can call, foundation ??? Please respond asap at the following email : lunajoan@cooptel.qc.ca We live in Valcourt, Qc . My name is Nathalie and my hubby is Luc. I will check my emails regularly.
2016-12-07 17:38:43 Rapport commentaire