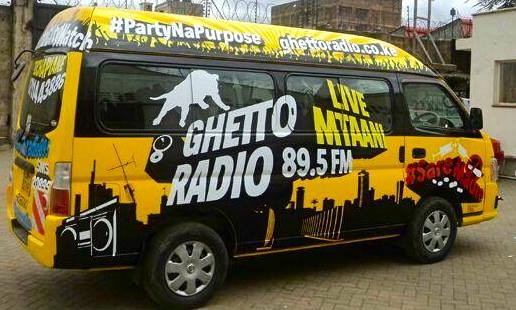 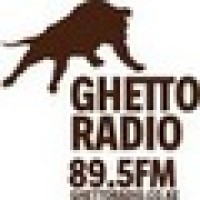 Ghetto Radio Nairobi. Your No. 1 Sheng station!! Keep it here for News in Local, International, Sports and Lifestyle. *Disclaimer: Views expressed here do not reflect the position of Ghetto radio Ltd. www.ghettoradio.co.ke

Ghetto Radio consists of the flagship 89.5FM Ghetto Radio station in Nairobi, and the websites http://www.thisisafrica.me/ http://www.ghettoradio.co.ke/ Ghetto Radio was set up to reveal the fuller picture of urban African ghetto life and culture by being a channel through which ghetto inhabitants, artists as well as regular inhabitants of slums and ghettos, can tell their own stories (through mu...sic, graffiti, blogs, comments, news items, stories, poetry, etc.). Ghetto Radio 89.5FM offers “Street credible” news, views and entertainment by people from the urban ghetto, to an audience within and beyond the ghettos. Future Ghetto Radio stations will offer the same to and from their respective cities. Online we offer (to an international audience) 1. Insider’s view of the craziness, chaos, ingenuity, absurdity, novelty, humour and vibrancy of urban street life, society and culture with insight & consciousness. 2. Features on Urban African street life that make a larger point, observation or comment on the society in which these lives are played out. We comment, provide insight and context, but not to judge. 3. Headline news from the perspective of, and effect on, those who depend on the informal economy for a living, i.e. those close to “the streets”. 4. A live audio stream of the 89.5FM broadcasts In other words, a more complete picture of urban slums/ghettos and its inhabitants than the relentless misery normally portrayed in mainstream media. Background information Ghetto Radio Foundation Ghetto Radio Foundatio, assists with the setting up of FM radio stations in Africa’s urban slums, with the aim of providing radio broadcasting training to motivated and talented youngsters, thus enabling them fill all the roles at “their” station and broadcast to the entire city the music and news that resonates with ghetto inhabitants. The flagship station in Nairobi has been on air since December 2007, and, according to independent media research by Consumer Eye, is already the most popular radio station among the 15 – 25-year old audience in Nairobi (http://haiya.co.ke/node/2271) More Ghetto Radio FM stations are in the pipelines for other cities in Africa. Awards Within five months of being on air, Ghetto Radio Nairobi was nominated for four awards, including best radio station. Ghetto Radio has been awarded and nominated multiple times for best show (Goteana, Gospel Nit Live), best station and best presenters (Mbusii, Esther Kagamba, Angel Wainaina etc), over the period 2008-2013. Contact For more information about the international operation, please contact Matt Brouwer at info@thisisafrica.me For more information about the African edition of Ghetto Radio FM station, please contact Maji Maji at majimaji@ghettoradio.co.ke Website: http://www.ghettoradio.co.ke/ https://www.facebook.com/Ghettoradio/app_190322544333196 See More

Assists with the setting up of FM radio stations in Africa’s urban slums, with the aim of providing radio broadcasting training to motivated and talented youngsters, thus enabling them fill all the roles at “their” station and broadcast to the entire city the music and news that resonates with ghetto inhabitants.