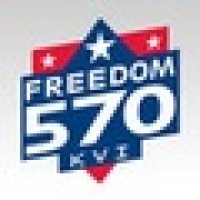 Fisher also owns several other television stations throughout the Northwest, including the Univision affiliate (KUNS) in Seattle.

In its storied history, KVI has been Oldies, Talk, Full-Service and was one of the first stations in the nation to adopt the conservative talk format, and certainly one of the first to help propel Rush Limbaugh to national fame.

KVI has always maintained a strong commitment to local programming that continues even today with some of the best known local talent in Tom Hutyler, Marina Rockinger, Mark Christopher and Ric Hansen.

With over 80 years of history serving the Pacific Northwest, KVI is known as one of the pillars of Seattle radio.

From humble beginnings in November 1926 in Tacoma, the station bounced around the AM dial a little bit before settling at its current 570 position at 5000 watts in the 1930's.

We were located in the historic Camlin Hotel (now a private residence) for awhile, as our first move from Tacoma to Seattle.

When Gene Autry's Golden West bought the station in the late 1950's, it moved to the nearby Tower Building (7th and Olive) into what were considered state-of-the-art studios at the time.

We carried the "pre-Mariners" (Seattle Rainiers) for many years, and stepped up to the real major league team when the Mariners showed up in town! Through the 1960's, 70's and early 80's, KVI was a dominant personality station, featuring incredible talent such as Robert E.

Smith, Michael O'Shea, Bill Taylor, Jack Spencer, along with so many others.

True to the heritage of the station, it not only "did" the format, but became an "Oldies Powerhouse" with a unique emphasis on Northwest artists as well as worldwide artists such as Elvis, the Beatles, and Rolling Stones.

Dick Curtis and Scott Burton were among those who defined and grew this format over the years.

In the early 1990's, KVI led the way as one of the first conservative talk stations in the country.

Soon, it became one of the most emulated and most successful, and helped establish Rush Limbaugh as a nationally-known talent.

A few years later, Gene Autry's estate was liquidated and KVI (and sister KPLZ) were sold to Fisher Broadcasting, owner of KOMO-AM and KOMO Television.

That move brought three of the most exceptional radio stations with Seattle heritage under one roof, and the three continue to operate collaboratively today.

In 2002, the station left its home of over forty years in the Tower Building (although it had moved in 1990 from the 8th floor to the 2nd floor) to join the rest of the Fisher operations in the brand new Fisher Plaza, a state-of-the art communications facility on the site of the old KOMO Television building across from the Space Needle.

On January 25th, 2010, The Bryan Suits Show returned in mornings and The John Carlson Show in afternoons.

KVI emphasizes our live, local talk and reminds listeners to celebrate and exercise the many aspects of freedom we enjoy.

We have our sights set on the 100-year mark for the station with a non-stop record of outstanding programming and community service.