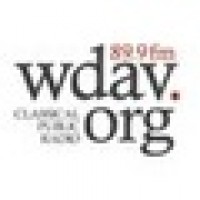 WDAV 89.9, a public radio service of Davidson College and licensed to the Trustees of Davidson College, is a member-supported public radio service providing classical ... See more music and cultural arts programming 24 hours each day. WDAV reaches a Charlotte, NC-centered 22 county market of 2.2 million people. The station attracts approximately 100,000 listeners each week and receives financial support from 5300 members. The station's 24-hour service is certified by the Corporation for Public Broadcasting and is a member of NPR National Public Radio and an affiliate of American Public Media carrying NPR newscasts at various times throughout the day.

WDAV is one of America’s leading producers of original classical music programming. In addition to producing 156 hours per week for its own broadcast use, the station produces nationally-distributed programs, including World of Opera, Concierto, SummerStages, and, in partnership with ETV Radio of South Carolina, Carolina Live. A service of Davidson College in Davidson, NC, WDAV’s 89.9FM signal reaches a 22-county region centered in the Charlotte, NC metro area and ranging from Rock Hill, SC to Galax, VA. WDAV’s broadcasts can be heard live online 24 hours a day at wdav.org and iTunes, as well as on any iPhone or iPad equipped with the "Tuned In," "NPR Music" or "Public Radio Player" app.