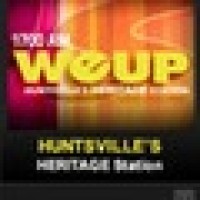 In 1958, the beginning of the high tech era, Huntsville proudly announced that the formation of a new Army Missile Command was underway.

The 100 watt AM station, owned by Leroy and Viola Garrett, signed on from a pink trailer on the grounds of Syler Tabernacle Church.

The broadcast was a mix of gospel, sermons, news, and rythmn and blues from sun-up to 6 p.

For the first time ever, black listeners in and around Huntsville, Alabama, had a voice of their own.

Listeners of 1600 AM were able to hear a viable mix of gospel and soul music as well as news and public affairs catering to the interests of the Tennessee Valley's black population.

The Garrets continued making history in the 1960s.

Their unwavering determination and perserverance, and public testimony before a congressional committee in 1963, resulted in the change of a Federal Communication Commission (FCC) law regulating 24-hour broadcasts.

That year WEUP began 24-hour broadcasts -- yet another milestone for black radio.

Garrett decided to sell the station in 1987, there was a silent nod to tradition as another successful, black, husband and wife team, Hundley Batts, Sr.

Virginia Caples, took the reins of ownership and operation of WEUP.

Realizing the important history and obvious potential of the radio station, the new owners acquired another station, WEUZ 92.

1 FM in Minor Hill, Tennessee and brought WEUP onto the FM broadcast airwaves.

Operating under the parent company name of BROADCAST ONE, Mr.

1, and adding WEUV-AM 1700 to the group of stations that are part of Huntsville's Heritage Station.

1 in Minor Hill, Tennessee, BROADCAST ONE's owners, along with its management and staff, are poised to continue the legacy of professionalism established by Leroy and Viola Garrett almost half a century ago.

Our reach now goes beyond the airwaves, as technology is allowing us to be heard globally on both of our web sites at www.

com We continue to grow and evolve while keeping one important constant in mind, our commitment to deliver the urban perspective, not only to listeners in two states, but also around the world.

The WEUP family of stations remains firmly committed to that goal and will continue to carry the torch and provide the community with a voice of its own.